The Narrm Oration is the University’s key address that profiles leading Indigenous peoples from across the world in order to enrich our ideas about possible futures for Indigenous Australia.  Narrm refers to the Country of the Melbourne region.

Delivered annually since 2009, the Narrm Oration is held every November on the Parkville campus. 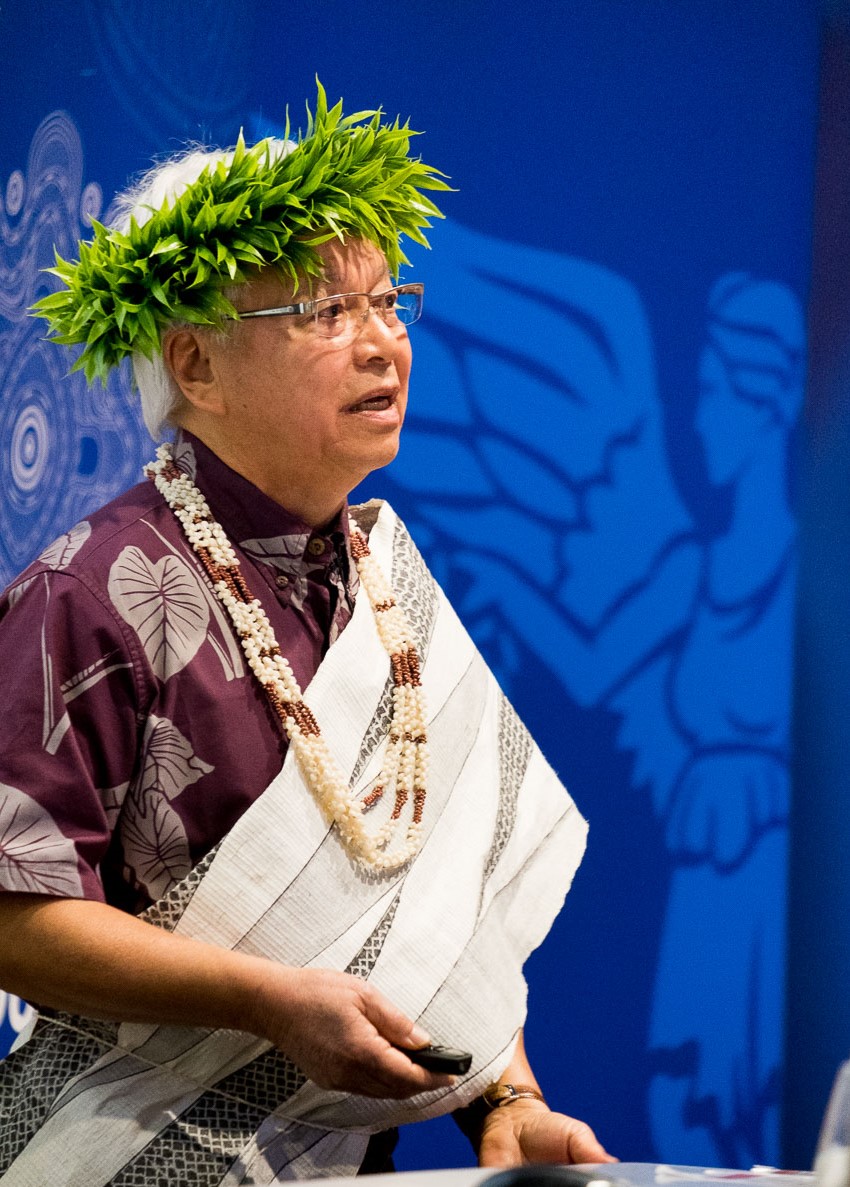 Dr Larry L. Kimura, PhD (Hawaiian), is Associate Professor of Hawaiian Language at Ka Haka ʻUla O Keʻelikōlani College of Hawaiian Language at the University of Hawaii Hilo.  He is chairperson of the Hawaiian Lexicon (new Hawaiian words) Committee for the Hale Kuamoʻo Hawaiian Language Center of the College focusing on Hawaiian curriculum development and teacher licensing for Hawaiʻi’s Department of Education K-12 Hawaiian Immersion / Medium Programs.  Dr Kimura is a Co-Principal Investigator for a National Science Foundation and National Endowment for the Humanities grant to digitise and archive spoken native Hawaiian speech documentation. He has been recording Hawaiʻi’s last native Hawaiian speakers since 1966 and most significantly through his hosting the Ka Leo Hawaiʻi radio program of some 525 hours of first language Hawaiian speakers for sixteen years, from 1972 – 1988.  Dr Kimura is the first President and Co-Founder of Hawaiʻi’s first Pūnana Leo Hawaiian language immersion preschools..

In the 2019 Narrm Oration ‘The Fabric of Hawaiian Medium Education: a Perspective for Indigenous Language Revitalisation’, Dr Larry Kimura imparted a progression of thirty-six years (1983-2019) of sorting out obstacles to advance the life of the Hawaiian language and cultural well-being.  Hawaiʻi now uses Hawaiian as the medium of education from preschool through to high school (P-12) and engages the essential curriculum content to participate in a larger global society through a Hawaiian philosophy of education because, as Dr Kimura states, "Our language binds us to who we are.  This setting challenges us to live in our language for today's world.  If we cannot live in our language today, how will it survive for the future?"

Niklas Labba, has grown up as a traditional reindeer herder and 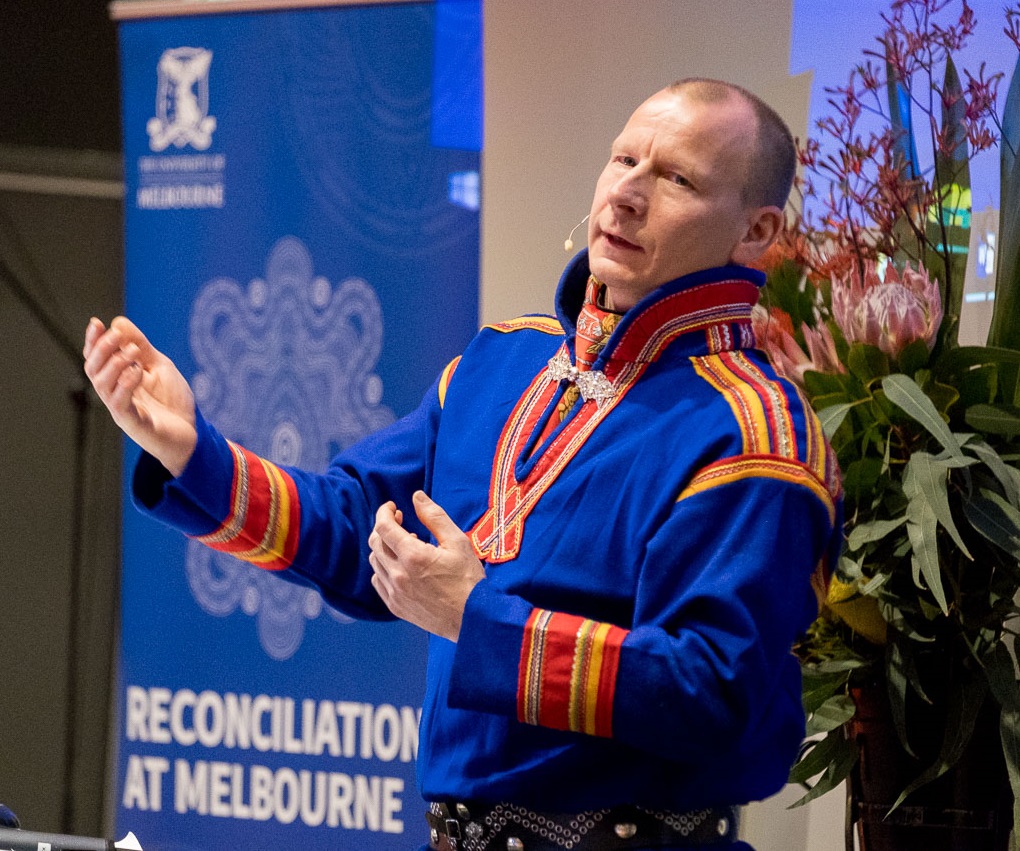 is today combining reindeer herding with employment as the Academic Director, Centre for Sámi Studies at University of Tromsø/The Arctic University of Norway. Before the position at the University, Labba was employed at the Norwegian Sámi Parliament as the Head of Section for Sámi language management and language politics development.  In this position he was involved in consultations between the Sámi Parliament and the Norwegian Government about a new language law proposal. Niklas has been part of several projects monitoring the impacts of climate change and has represented both the Swedish and Norwegian Governments in expert groups connected to the Arctic Council, the Convention on Biological Diversity and United Nations bodies.

The Uluru Statement, released in 2017, has prompted widespread discussion in Australia around the creation of a constitutionally enshrined Indigenous voice to parliament. As this conversation progresses, and Indigenous and non-Indigenous Australians alike pressure the government for constitutional recognition and treaty, we can learn from the struggles and successes of First Nations peoples around the world whose stories guide and inspire.

The story of the Sámi offers profound lessons on constitutional recognition and self-determination for Indigenous Australians today.  With Sámi people divided across four nation states – Norway, Sweden, Finland and Russia – the likely future for the Sámi differs greatly across those states. Only in Norway is the right of the Sámi to self-determination recognised and an agreement between the Sámi Parliament and the Norwegian state in place that the former should be consulted about issues concerning the Sámi people. This is, in principle and in part, what the Uluru statement requested: an Indigenous voice to the Australian Parliament.

As the Sámi look to secure their future in each of these geographic territories, there is ongoing discussion about a Nordic Sámi Convention to increase the equitability of nation state policy towards the Sámi people rather than the creation of a Sámi state.  Niklas Labba offered precious insights into the fundamental importance of First Nations voice and constitutional recognition to the long-term prosperity of Indigenous peoples across the globe. 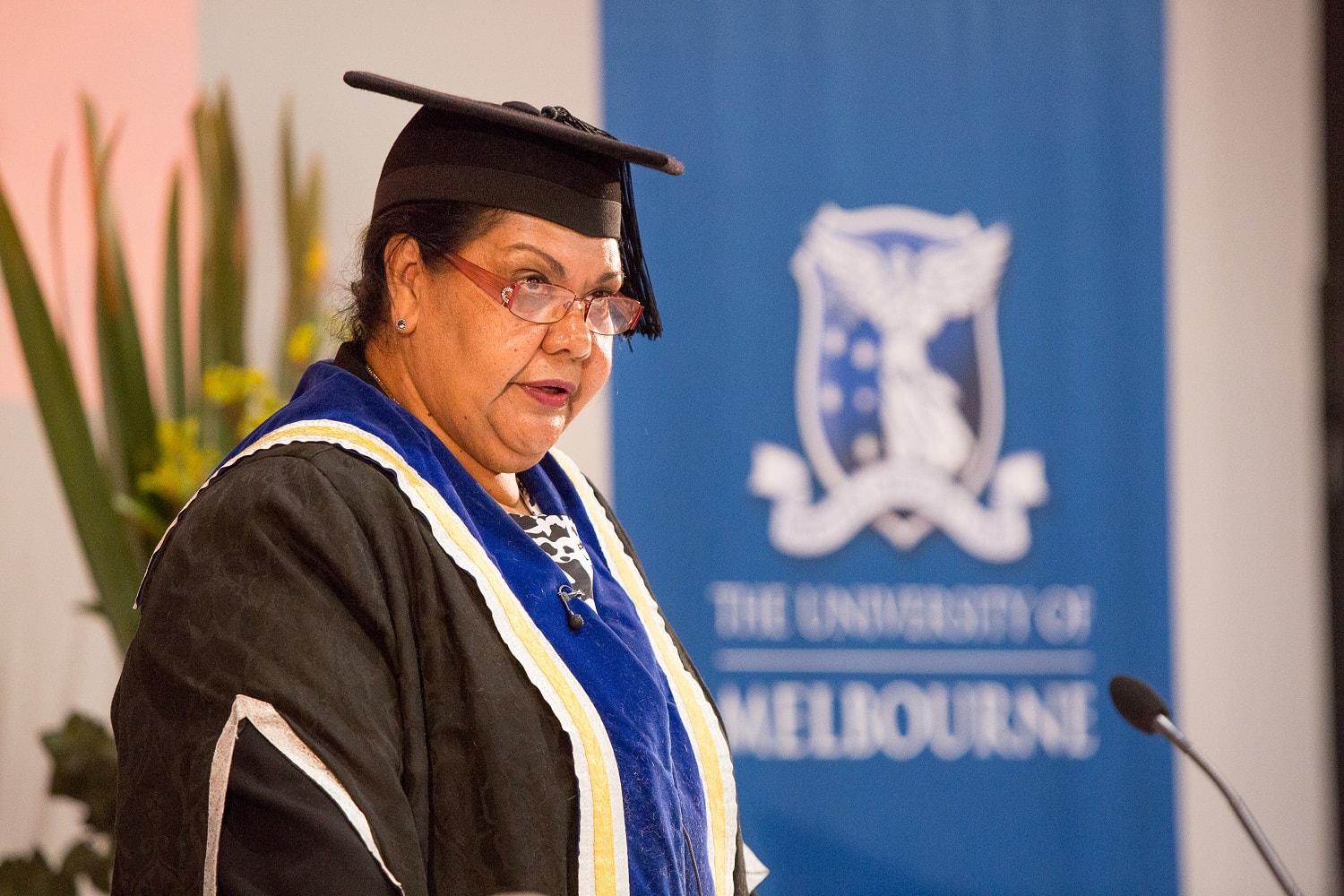 June Oscar AO is a proud Bunuba woman from the remote town of Fitzroy Crossing in Western Australia’s Kimberley region. She is a strong advocate for Indigenous Australian languages, social justice and women’s issues, and has worked tirelessly to reduce Fetal Alcohol Spectrum Disorder (FASD).

June has held a raft of influential positions including as Deputy Director of the Kimberley Land Council, Chair of the Kimberley Language Resource Centre and the Kimberley Interpreting Service, and Chief Investigator with WA’s Lililwan Project addressing FASD. She was appointed to the Aboriginal and Torres Strait Islander Commission (1990) and was a winner of the 100 Women of Influence 2013 in the Social Enterprise and Not For Profit category. In 2015, June received the Menzies School of Health Research Medallion for her work with FASD. She is a co-founder of the Yiramalay Wesley Studio School and a Community member of the Fitzroy Valley Futures Governing Committee. In February 2017, June was awarded an honorary doctorate from Edith Cowan University.

The Uluru Statement has inspired Indigenous people and many other Australians to think big about their sense of Australian nationhood and the potential for Indigenous recognition and inclusion in Australian nation building. Within this thinking, must be addressed the fundamental importance of rebuilding Indigenous communities whose cultural, social and economic fabric have been shattered by colonisation over many generations.

In the 2017 Narrm Oration – Resilience and Reconstruction: The agency of women in rebuilding strong families, communities and organisations – June Oscar suggests that the Australian nation must invest in a strengths-based approach to Indigenous community rebuilding and recovery, and recognise that our Indigenous female leaders are our greatest agents for change and empowerment. There is much to celebrate when we consider their great work, and that of the non-Indigenous women who have supported the aspirations of Aboriginal and Torres Strait Islander peoples and partnered with them in building a better tomorrow.

Stan Grant is an Australian man of Wiradjuri and Kamilaroi heritage. He spent his young years on the road in an itinerant family searching the backblocks of New South Wales trying to survive. His journey has taken him around the world as a journalist covering the biggest stories of our times, from war and conflict to revolution, disaster and political and economic upheaval. Stan has won some of the most prestigious awards in journalism both in Australia and internationally. He has published two critically praised and best selling books The Tears of Strangers and Talking to my Country, and is the author of the recently released Quarterly Essay looking at Indigenous futures. Stan has worked for the ABC, Seven Network, SBS, National Indigenous Television, Sky News, The Guardian newspaper and, for more than a decade, as senior foreign correspondent with CNN based in Asia and the Middle East.

2016 has been an annus horribilus for indigenous people. A 10-year-old girl took her own life in a tragic reminder that Aboriginal kids are nearly 10 times more likely to commit suicide. The treatment of boys at Don Dale detention centre outraged the nation, sparked a Royal Commission and shone a light into the plight of the most incarcerated population in the country. Deaths in custody, protest, violence and a crisis in Indigenous policy all paint a dire picture. Yet amid the gloom there is a spark of hope: more Indigenous kids are finishing school and graduating university, Indigenous performers are topping our charts and winning awards, Indigenous sportspeople dominate in their fields and the Indigenous middle class is growing faster than any other sector of the population. These are the descendants of the great Aboriginal economic migration of the 20th century. These pioneers caught the tailwinds of economic boom and social change, they transformed their lives and altered forever our country. Stan looks at how far we have come and the pathway to success.

Professor Marcia Langton holds the Foundation Chair of Australian Indigenous Studies at the University of Melbourne. She has produced a large body of knowledge in the areas of political and legal anthropology, Indigenous agreements and engagement with the minerals industry, and Indigenous culture and art.

In the 2015 Narrm Oration, 'From hunting to contracting', Professor Marcia Langton addresses Indigenous economic development: 'The gates have been opened. Indigenous Australians have been formally allowed into the Australian economy. First the iron ore miners, then many of the top 200 Australian corporations, and now the Commonwealth government, have created an Indigenous supply chain by procuring goods and services from Indigenous businesses. This follows the history of economic exclusion from colonial times to the 21st century. In many ways, Indigenous people remain locked out of normal economic participation. So, with one gate open, we should now think about removing the fences.'

Professor Smith has worked in the field of Māori education and health for many years as an educator and researcher and is well known for her work in Kaupapa Māori research. Her book Decolonising Methodologies Research and Indigenous Peoples has been an international best seller in the Indigenous world since 1988.

Profesor Taiaiake Alfred is the founding Director of the Indigenous Governance Program at the University of Victoria in British Columbia, Canada. Professor Alfred specialises in traditions of governance, decolonisation strategies, and land based cultural restoration.

'Being and Becoming Indigenous: Resurgence Against Contemporary Colonialism'

Professor Megan Davis is Professor of Law and Director, Indigenous Law Centre, Faculty of Law at the University of New South Wales. She is also an expert member of the United Nations Permanent Forum on Indigenous Peoples.

Professor Davis spoke on Aboriginal women and the limitations of the right to self-determination. She argued that the way self-determination has been configured in international law, and interpreted by the state and Indigenous communitites, has been skewed in a way that impedes the capacity of Aboriginal women and girls to freely determine their economic, social and cultural destiny. She provided an alternative view of self-determination based on individual capability – what each individual is able to do and to be. Accordingly, for Aboriginal women to achieve a threshhold of wellbeing, the current level of violence, vulnerability and disadvantage they face needs to discussed openly and addressed.

Mr William Iggiagruk Hensley is an Inuit Leader known for his extraordinary contribution to the Alaskan Native Land Claims Movement. Willie was elected to the Alaska House of representatives at the age of 25. He played a critical role in the negotiations surrounding the development and enactment of the Alaska Native Claims Settlement Act of 1971 that set aside 44 million acres and awarded $960 million for the Alaskan Natives. Willie has recently been named as Distinguished Visiting Professor by the University of Alaska in Anchorage and will be presenting a class called 'Alaska Policy Frontiers: Exploring Future Realities'.

Dr Manley A. Begay Jr is Faculty Chair, Native Nations Institute for Leadership, Management, and Policy, Senior Lecturer in the American Indian Studies Program at the University of Arizona, and Co-Director of the Harvard Project on American Indian Economic Development at Harvard University.

'For Indigenous North Americans, it’s a wonderful time to be alive. I never thought that in my lifetime I’d see a resurgence of this magnitude where Indigenous people and native nations are calling the shots. In turn, wonderful things are happening.'

'Indigenous Development: The Academy as a Site for the Transmission of Old and New Knowledge and the Advancement of Indigeneity.'